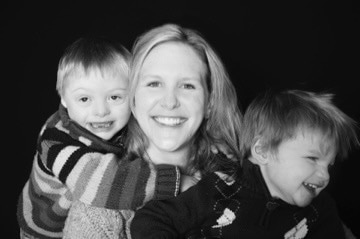 As a mom to a son who has Down syndrome, raising awareness of the condition, advocating open-mindedness, and celebrating the achievements of people with Down syndrome comes naturally to me. It has really become a passion of mine due to the way so many people misunderstand Down syndrome and are hesitant about how to treat people with special needs. I humbly admit that before Guion, my son with Down syndrome, my exposure to this population was limited and the diagnosis devastated me.

Dealing with a Down syndrome diagnosis

While I was pregnant with Guion, my doctor noted indications that he may have Down syndrome, but that did not make learning of his diagnosis any easier. My husband, Mac, shared the news with me about an hour after Guion was born. We were shocked and scared. Excited to have our son in our arms, but worried about what his future may look like and how he may be treated.

If you’re not familiar, Down syndrome is a condition in which a baby is born with an extra copy of the 21st chromosome. The extra copy of chromosome 21 impacts how a baby’s body and brain develop, which can cause cognitive and physical differences which vary greatly depending on the person—just as physical and cognitive differences exist in all people.

Misconceptions about Down syndrome

Guion sometimes gets stares when we’re out and about. He doesn’t notice (he’s often staring right back), but I do. And to be honest, it frustrates me. Guion may look or sound different, and “different” just scares people. People look at Guion and see Down syndrome instead of an individual with interests, emotions, abilities, and dreams.

Because Guion looks and sounds different, he often gets put into a box. People assume that he won’t live a “normal” life and do what “typical” teenagers like to do. These assumptions are limiting to Guion and other children with Down syndrome. They steal their opportunity to be who they authentically are. And perhaps, just as importantly, they rob the person making the assumption of the opportunity to engage and learn from Guion and others like him.

In the first few months of Guion’s life, Mac boldly led us in learning how to be parents to a child with Down syndrome. He immediately began calling people to learn more about the condition and get engaged with the community. We met with several families who had children with special needs and had the opportunity to ask them questions, get to know their children, and ultimately, gain a better understanding of what Down syndrome could mean for our family.

Our takeaway was that as long as children with Down syndrome are seen and treated as though they are different, they will not have the opportunity to be more. Guion has so much to offer if he is given the opportunity. He’s funny, intuitive, and kind. He surprises us daily with his beautiful perspective of the world around him. Sure, he can be shy but just ask him questions as you would other children, and he’ll open right up.

We decided early on that Guion’s diagnosis would not define him, and we keep our expectations for him high. We resolved that his appearance would not dictate his abilities and opportunity must precede ability. Guion is an older brother to his two siblings, and we treat them equally when it comes to expectations (don’t lie, cheat or steal among others), opportunities, and access to our community resources (sports, education, entertainment, etc.).

Different doesn’t have to be so scary

The day we discovered Guion had Down syndrome was tough. Like I said earlier, “different” is scary. But, different doesn’t have to be so scary.

The reality is, we’re all different in all sorts of ways. Embracing the differences in each other makes our world a beautiful and colorful place. I’m far from perfect, but that is one lesson having a son with Down syndrome has taught me. Because of who Guion is and how he sees the world, I’m a much better person.

Guion inspired me to write Guion The Lion, a children’s book about an imaginative little lion who sees things differently from his friends. The story presents children with a message of empathy, curiosity, and adventure before they begin making their own judgments and assumptions about people who are “different.”

While the book was inspired by a person with special needs, it is applicable to so many other issues our children face today. My hope is that it encourages children, and parents alike, to embrace others’ differences and perspectives. Don’t be scared by the differences you see around you, engage in them and grow from them. I bet your world will become a more colorful place for you.

In case you haven’t heard, October is Down Syndrome Awareness Month. I invite all of you to join me and our GTL friends to celebrate the differences that make our world a beautiful and colorful place this month and all year long. Follow along on Facebook and Instagram!